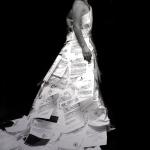 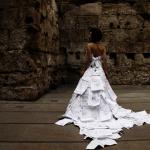 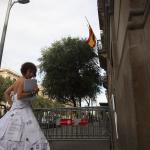 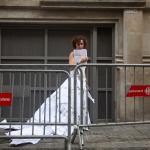 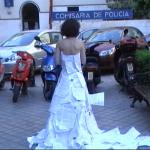 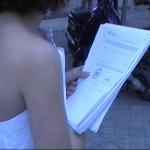 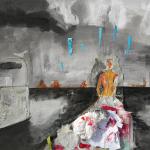 Artist Without Residence turned to be a long-lasting project of mine, although primarily it was not meant to become a project at all, even less a long-lasting one. However, the real life circumstances shaped both itsb form and length. bArtist Without Residenceb is an attempt to tell, with available artistic means, the story of living in European Union for years as a non-EU balienb - without permanent residence and legally deprived of the right to mobility from the edge of the society. And itsb bottom.

It all started with the painting, an bautobiographicalb one, named bOn the Way to Police Stationb. When I painted it, I was unable to read my future. It was completely incomprehensible to me that bthe way to policeb wouldnbt be something temporary, but permanent. The only permanent thing in my blegal statusb. It made me feel very important. Dangerous, too.

bDress for successb was a phase two. A long, heavy dress btailoredb of hundreds of bpapersb from the embassies, immigration offices, police, schools that I needed to be able to study (arts) first in Netherlands, then in Spain. Although many of them were in contradiction one with another, for years my life depended, and still depends on them.

That dress, as it is, became my real ID. I have other IDs - official and unofficial, personal and artistic. From this one, unfortunately, I wasn't able to run away. Therefore, the third phase were bpublic performancesb b dressed in the bDress for successb I was walking to police stations and immigration, initiating signing petitions for the respecting right of human dignity, freedom of mobility, freedom to live...amp;

The "Dress for Success" and performances Ibve done in it received a lot of publicity both in Spain and Serbia/former Yugoslavia. That led to an intensive public discussion. Furthermore, through different channels the photos of the Dress for Success and of my performances approached even the highest forums and officials of European Commission. The Brussels correspondent of news agency Tanjug stated that bDress for Successb was a significant push towards visa liberalization process between European Union and Serbia.

"Tailoringb and wearing it was my very personal human and artistic bact". I said with it what I felt the urge to say. I was not thinking how far the message will go, and I didnbt have any bmarketing strategyb or institutional aid to spread it, especially to the political forums. It found itsb way though. For me, that was quite a satisfaction. And, I moved forward, thinking that that (hi)story happily ended.

Then, from time to time I was receiving news that bmyb dress was recognized by some other people b asylum seekers from Ethiopia or immigrants from Latin America b as their own. I was deeply touched, but I canbt say that I was happy realizing that actuality of my bpiece of artb doesnbt shade. That was, so to say, the fourth phase b life of its`own.

Recently, after another bway to the policeb, Ibve learnt that my status remains unclear b no permanent residence, neither after 11 years of residence. I finally realized that an old project is actually the sequel: Artist Without Residence.
.B

By the nature of her horoscope, Nevena Dragosavac (1981, Belgrade, Yugoslavia) was predestined to become an bartist without residenceb. She studied in Netherlands and Spain B (graduated in Granada), has been living in Barcelona for years, and after all is still enjoying the status of a non-EU alien. That privilege (in)directly shaped both her personal experience and artistic sensibility. Big part of her opus is directly dealing with issues of (i)mobility, borders, divided identities. She had several individual exibitions and was also a part of group projects and exibitions in Spain, Netherlands and former Yugoslavia.