Edges: Written and Visual Reflections on Marginal Space and its Exploration | ALESSANDRA CAMPOLI

Rapid modernisation has involved drastic spatial transformation and the consequent appearance of ruinous sites on the fringe as well as in the centre of urban landscapes: aborted constructions amongst the high-rises; industrial derelicts; vacated or abandoned buildings left behind during periods of urban development and social changes; confiscated yards. The city, the metaphorically domesticated space of order and regulation, where boundaries ought to be delimited and linear, has increasingly enclosed such elements b these modern ruins b that transgress and subvert our everyday encounter with space and place.

Places of neglect and loneliness, sites of disintegration and disorder, these modern ruins testify, in fact, to an unnatural growth that is both uncontrollable expansion and inevitable decay, with the consequent impressive merging of blooming and fading, a visible alliance of life and death. Unlike the museum-like ruins of the past clearly representing something definitely gone by, these contemporary ruins of our urban modernity, remain in and of time, exactly as nature does.

"In a word, they decay, and they do so in an animated and vibrant way. The result of this active decay is that modern ruins viscerally engage with our senses." [1] 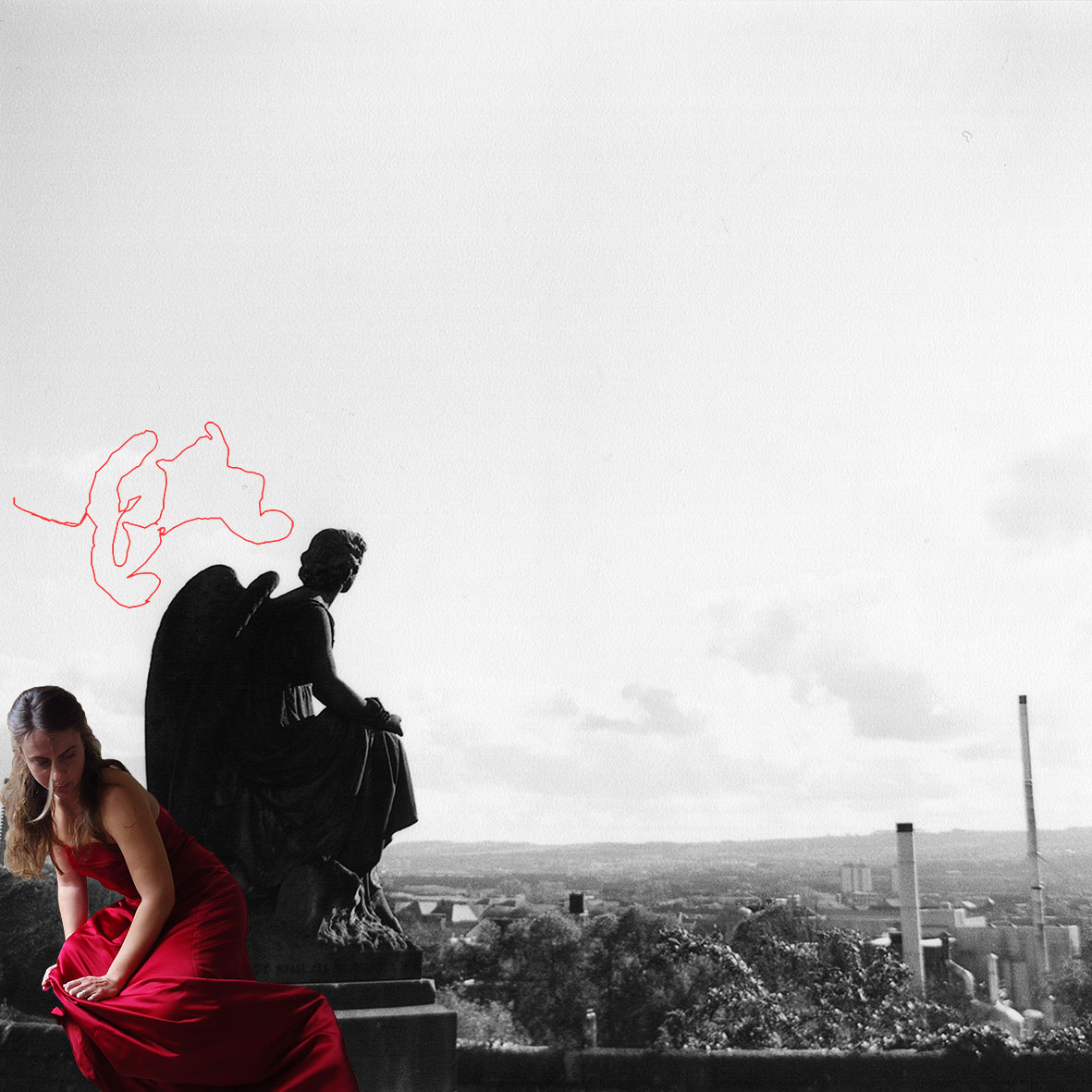 .Modern ruins with their ambiguous, fragmented and incomplete nature, with their creative disruption are, in fact, capable of generating a reciprocal relationship with the viewer, arousing a feeling of sublime melancholy - in a Kantian perspective. In tension between destruction and creation, the ruin preserves life among decay, is vital despite its apparent inactivity: its soul is characterized by organic decay, which is vital in its decomposition: not dull decay. This lively decay is present in the vegetation that grows in and on it; it is in the walls and the ground, changing shape and redrawing a new shape. It is also present however in our recognition of an irrevocable loss that lies in the characteristically continuous movement of ruins as an aesthetic peculiarity, in contrast to the endless stability of modern buildings [2]. And this vital decay lies in the ruinsb escape from previous assignations delineating the meaning and purpose of their space, and of the objects and the entities that populate that space, thus letting imaginative, sensual, conjectural values appear, beyond their original functions [3].

Unlike familiar domestic space with its more or less fixed boundaries, in ruins malleability and porosity, in their broadest sense, prevail and, with this lack of fixed meaning, objects and the space they populate become more profoundly meaningful and take on a shadowy uncanny nature. They bring the outside inside, breaking a binary geometric opposition between spatial concepts b that of bhereb and bthereb, of positive and negative, of bbeingb and bnon-beingb, of protecting and dangerous b traditionally in relation, tinged by alienation and reciprocal aggressiveness [4]. Ruins substantially act as margins to the home, where home, according with the geographer Yu-Fu Tuan, can be considered as:

"...The centre of an astronomically determined spatial system. A vertical axis linking heaven to the underworld passes through it. The stars are perceived to move around onebs abode; home is the focal point of a cosmic structure." [5]

And where margins, in opposition, are the outside, the alien, the chaotic: places that, escaping the conventional rules of human rationality, obey different, often subverted, laws. . 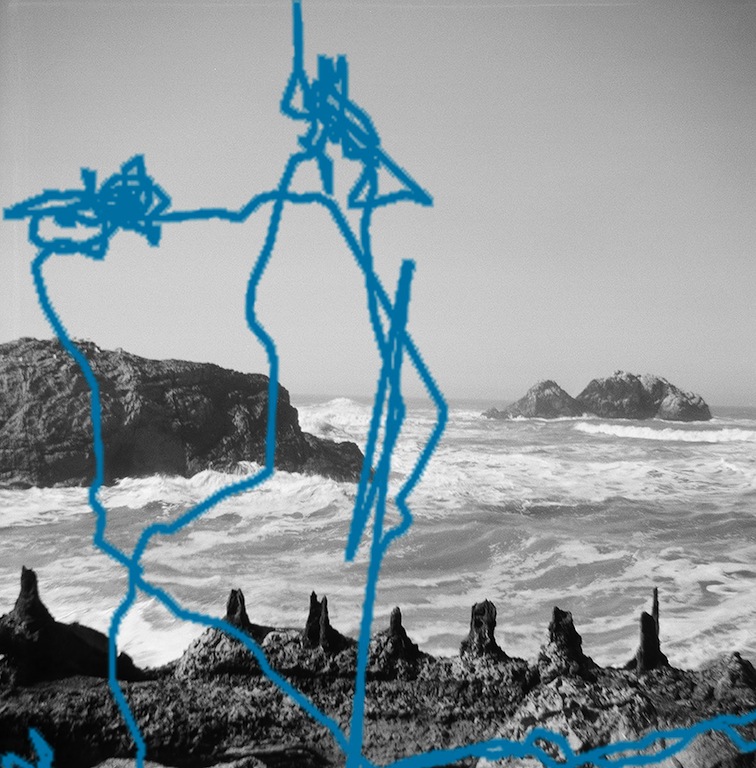 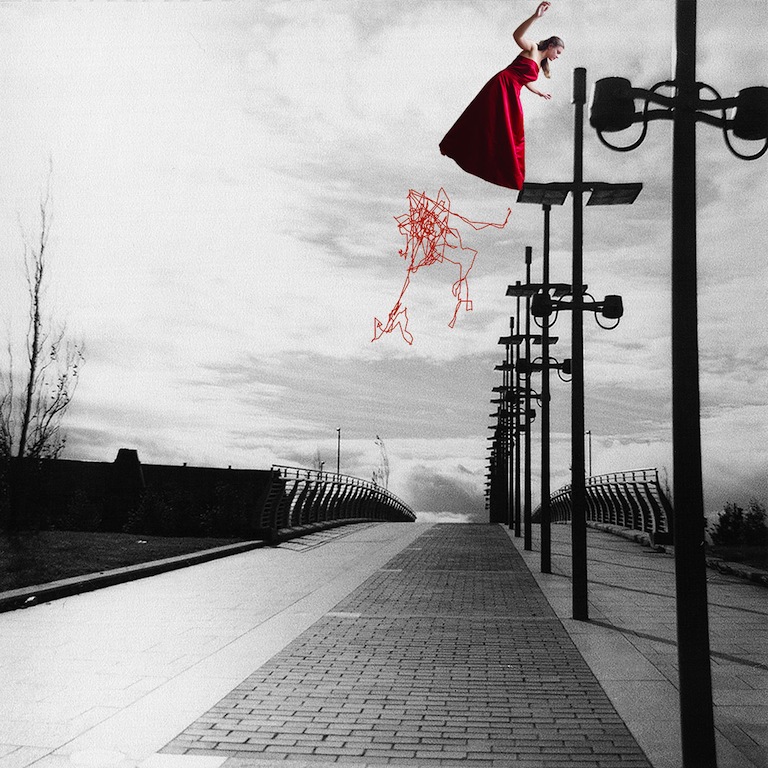 If we think of the human space, we can, in fact, figure it as a series of concentric circles whose centre is the home, a kind of cocoon of security. Moving from this centre toward the periphery, the lines delimiting the circles progressively lose their preciseness, their traits becoming less and less clear. In so doing, our gait becomes increasingly uncertain, our movements lack confidence, we look for something to cling to, while a part of us slips into a state of confusion. Where the traits fade, the light also fades: certainties fade. And their fading is in inverse relation to the progressive rising of fears born of the loss of our familiar certainties: indeed, fears are banished to the margins: there they appear and take form. There the Freudian unheimlich, the buncannyb, is manifest as an experience of disorientation generating indefinable dread and horror, as something that ought to remain secret and hidden but has come to light [6]. There the marginal space is. . 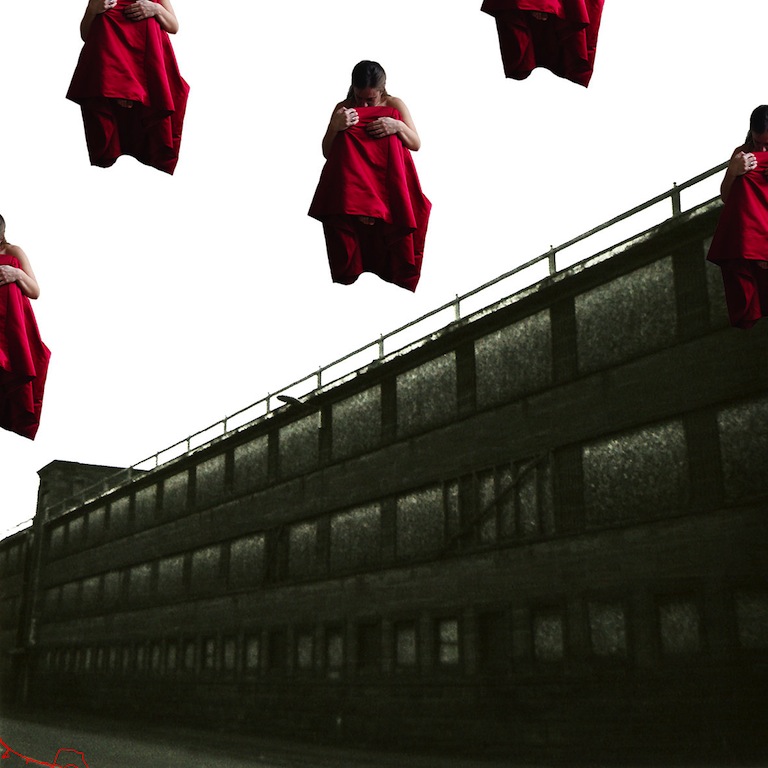 Margins mean not only the periphery of a horizontal space: the collocation of marginal space at some distance from the centre of security b which is tangible familiarity b can be temporal or spatial, real or symbolic. In any case, it is a distance beyond which one can lose oneself, beyond which frightening encounters can happen; beyond which, moreover, the familiar rules no longer have any relevance. The marginal can be a forgotten place in the very centre of the city, a place where the urban space is transformed into something strange and menacing, where it reveals a nightmarish image of itself [7]. Margins can extend vertically, as stratigraphic space lying beneath, buried in the ground; or they can be conceived as a fragmentary space within the city, where modernity is brusquely interrupted by the presence of a rejected space belonging to the past; or as the place of trauma b whether individual or collective b where a dramatic, violent event changes peoplebs approach to a specific area or, finally, as a place of loss: either real or metaphorical loss. . 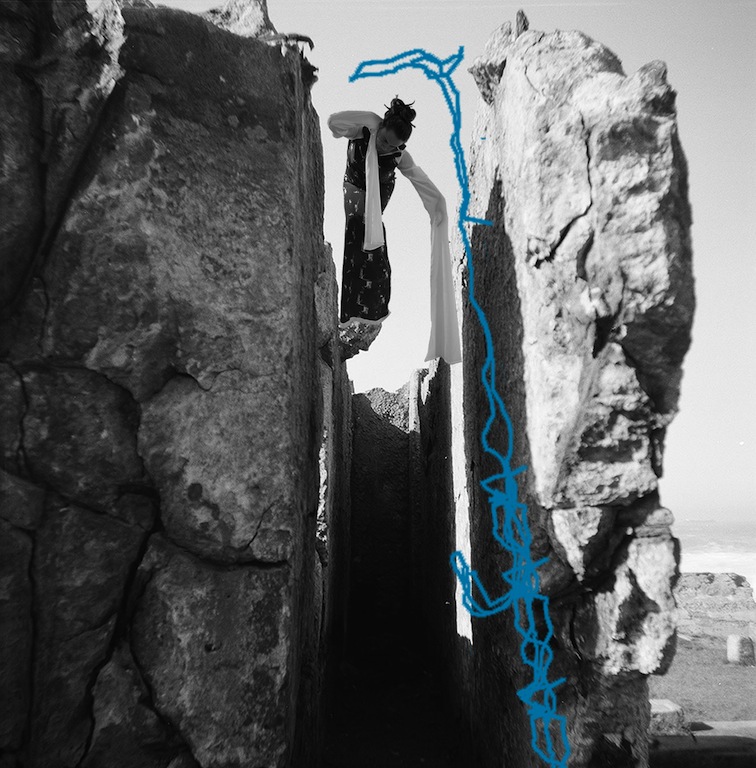 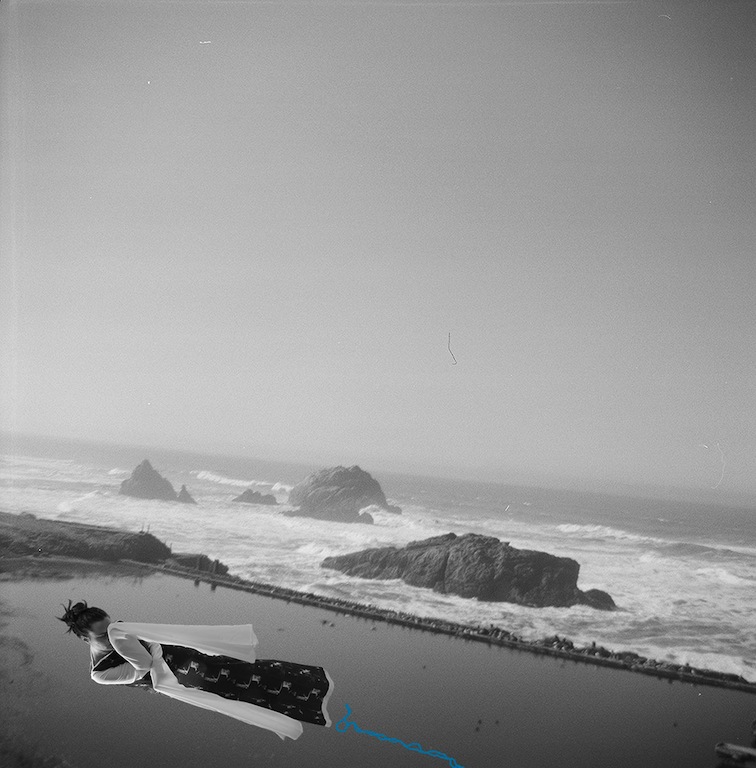 In accordance with these premises, a number of questions arises:

In an attempt to answer these questions in a creative way the work Edges took shape[8]. The work aims, in fact, at exploring the points above by employing and combining the use of various artistic media (old and new), such as photography, performance art and GPS drawing.

This choice is dictated by the desire to create a visual reflection on marginal space in which different layers of perception of space materialise. Indeed, while photography is capable of figuratively representing and documenting reality, performance art provides the possibility of materially interacting with the space, of penetrating it, of physically perceiving and expressing its meaning. GPS drawing, finally, simultaneously facilitates a physical exploration of the space and an abstract representation of it [9].
. 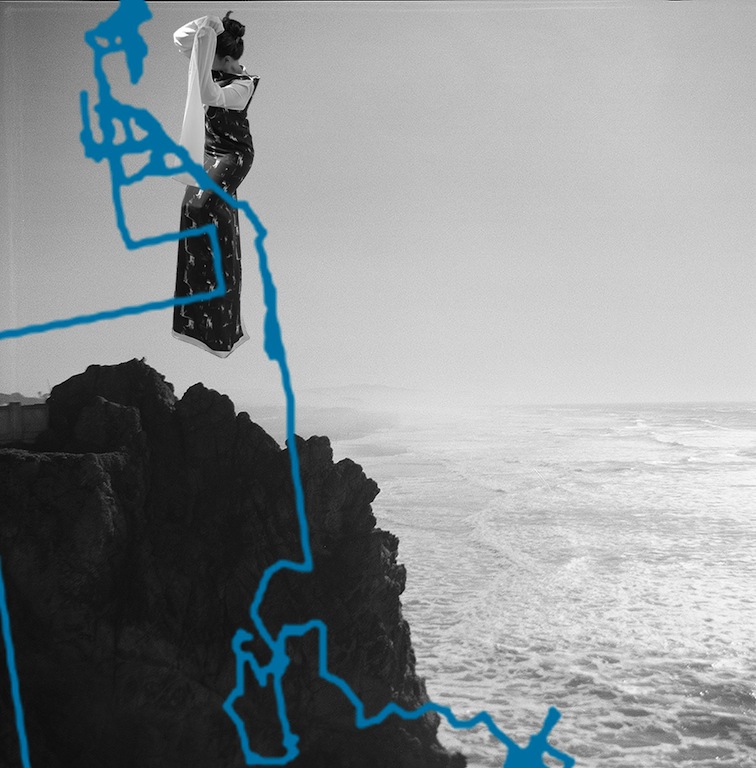 Locative art, or GPS art, - combining exploration, physics and technology with the world of artistic experimentation - can be conceived as a dynamic art which, through a real survey of places and physical immersion, allows the landscape b natural or cultural b to be re-imagined in a virtual and artistic form and its physical space remapped using symbolic or emotional meanings.

Beyond its aesthetic implications and explorative content, however, so far GPS art has hardly been considered in any specific relation to environmental, social or philosophical issues, in areas in which, on the contrary, it possesses endless creative possibilities of action, thanks to its specific explorative and scientific features. Nevertheless, it has been used very little in combination with other artistic media with which it could interlace a multifaceted visual relationship, leading to interesting aesthetic and narrative results.

Starting from research on significant places in relation to the idea of bmarginb, the project develops by working on those same places and on their meaning, approached through photography (analogue black-and-white photography), or bringing them alive through performance art, collecting stories and tracing the GPS drawing (consisting of lines or circumferences, shapes, journeys, etc.). The aim is to create multimedia works in which images, places, bodies and oral narratives merge in the geographical-mythical-symbolic mapping of marginal space in our contemporary world: a visual reflection on boundaries, edges, limits: visible and invisible lines that soundlessly change our subconscious perception of the space around us. . 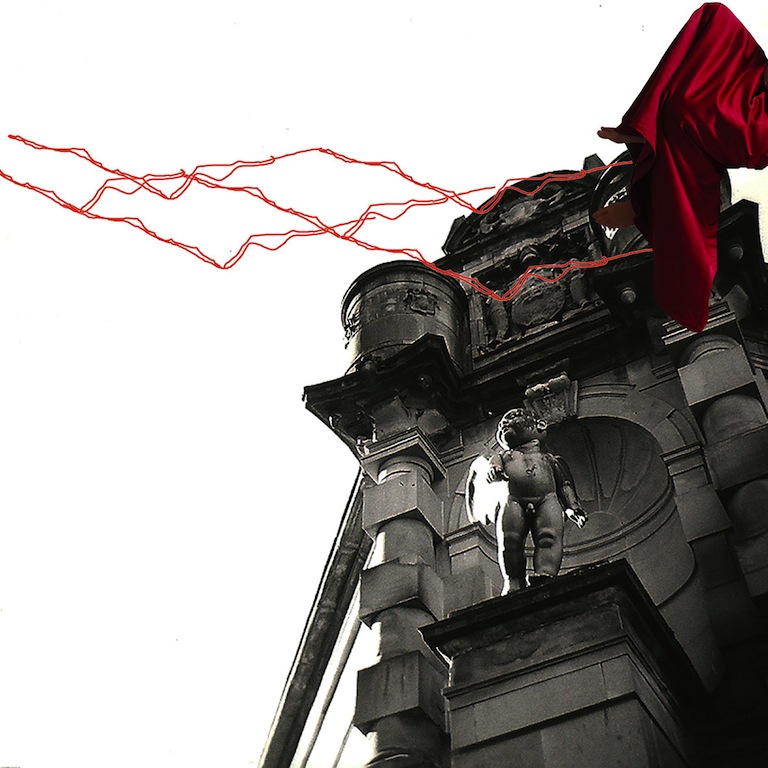 Alessandra Campoli was born in Rome, Italy in 1976. She trained at Rome University and the University of the West of Scotland where, in 2012, she completed a practice-based PhD in Media Arts. Alessandra is now based in Glasgow and is tutor in art and design at the Interactive Design Institute (Edinburgh) and a practice-based researcher.B Alessandrabs artworks comprise installations, photography, videos and performances. At the origin of her artwork is the idea of a mythical, lost language and research to make it come alive through significant objects, foggy images and a performing body.

[1] Trigg, D. (2010) Architecture and Nostalgia in the Age of Ruin. [Online]. Academia.edu. Available: http://polytechnique.academia.edu/DylanTrigg/Papers [8 March 2010].
[2] Ginsberg, R. (2004) The Aesthetics of Ruins. Amsterdam and New York: Rodopi Press., pp.157-158
[3] Endsor, T. (2005) Industrial Ruins: Space, Aesthetics, and Materiality. Oxford: Berg, p. 123.
[4] Bachelard, G. (1961) La Poétique de lbEspace, Paris: Presses Universitaires de France, p. 192.
[5] Tuan, Y.F. (2001) Space and Place: The Perspective of Experience. Minneapolis: University of Minnesota Press, p. 150.
[6] Freud, S. (2004 [1919]) The Uncanny. London: Penguin Books, pp. 237-258.
[7] Coverley, M. (2006) Psychogeography. Harpenden: Pocket Essentials, p. 45.
[8] Started in 2011 Edges has already explored Glasgow's marginal cityscapeB and San Francisco's edges with the Pacific. The results of the work have been exhibited in the solo exhibition Edges at The Arches, in Glasgow in 2011 and in the collective exhibition The Last Mile, at The Bonnafont Gallery, in San Francisco, in 2012. The project has received the support of Creative Scotland.
[9] Locative art, or GPS Art consists, in fact, of employing the Global Positioning System (GPS) to trace a journey on the Earthbs surface through the trilateration of microwave signals from satellites and of subsequently using the recorded track as a basis for drawing, sculpture and 3D installations.