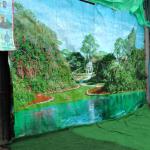 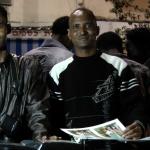 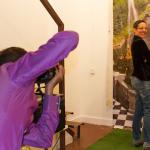 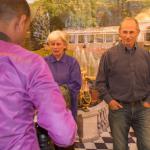 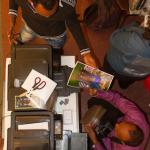 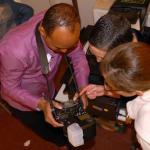 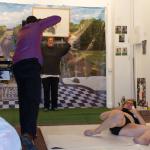 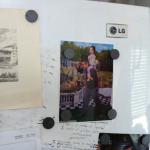 Photo Green Land is an event-based work, in which I invited the Eritrean refugee and photographer, Semere Teklay, to set up his photo studio in the gallery. Semere runs a photo studio on the streets called 'Photo Green Land' with his brother, Angosom, in the refugee and migrant worker neighbourhood of Neve Sha'anan in Tel Aviv, Israel, where people b usually other refugees - can get their photos taken in front of an exotic backdrop; the photos are printed and laminated on the spot for 15 shekels for a medium size photo. There is a significant Eritrean refugee population in Israel, and as in many other places, the refugee population is not well integrated into society, and Neve Sha'anan is often considered as one of the least desirable neighbourhoods in Israel.

During Photo Green Land, Semere set up his studio inside P8 Gallery (Tel Aviv), and the general public was invited to come have their photo taken, during an open exhibition when artists were invited to perform live artwork. As always, the photos were printed and laminated on the spot. 15 shekels for a medium size photo, 20 shekels for a large photo.

Vienne Chan was born in Hong Kong (1980) and studied the philosophy of religion in Montreal, Canada. She began making experimental videos independently in 2007. Her practice ranges from single channel videos, to performance and installations. In 2010, Vienne was awarded a Pepinières européenes pour jeunes artistes MAP residency, which was hosted at Clube Portugues de Artes e Ideias and Plataforma Revolver (Lisbon, Portugal). In 2012, her work VbLabIr was presented at the CCA (Tel Aviv, Israel), and was awarded the Jury Prize for video in the exhibition Besetzt: Diskurse zu Kunst, Politik und Aesthetik, at Platform 3 (Munich, Germany). lesviennoiseries@gmail.com