Sarah Shamash's 2011 multi-media work (dis)location - Sampa [1] uses a quote by the Brazilian social geographer Milton Santos as a point of departure: "Modes of production write History in time; social formations write them in space. Taken individually, each geographical formation is representative of a mode of production or of one of its moments."[2] Given Shamash's interest in subjective social mapping practices, Santos' quote is an apt starting point for the second iteration of her (dis)location series. The project, which began in 2009 in Salvador, Brazil,[3] aims to capture the vernacular of everyday lives and blivedb geography. Consisting of a web, mobile and film component, this latest work focuses on the historic downtown of Sao Paolo, Brazil b a space formed and shaped through the interaction of various socio-political and economic forces from its beginnings as an indigenous trading post to its current status as one of Brazil's commercial centers.

(dis)location - Sampa traces the daily work rituals of three people working in the city's decaying historical center: Ana Cecilia, an illegal Ecuadorian street merchant; Valdemar, a "caroceiro", who hand pulls his recycling cart through the city center; and Seu Carlos, a lift operator, manually operating a 1920s cage elevator in an old building downtown. Through each of their personal stories, Shamash considers the link between economics, mobility and space. Shamash's work deliberates on the notion that space, place and its perception are indeed not neutral concepts. Instead, in line with Doreen Massey's assertion that space can be defined as social relations stretched out,[4] the stories of Ana Cecilia, Valdemar and Carlos suggest that onebs ethnicity, gender, age and social position interact to inform each individualbs experience of place. . 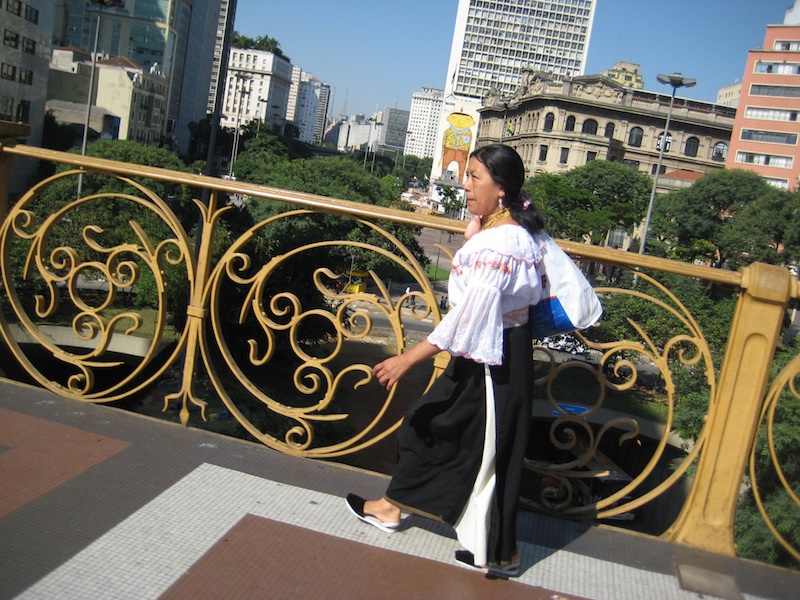 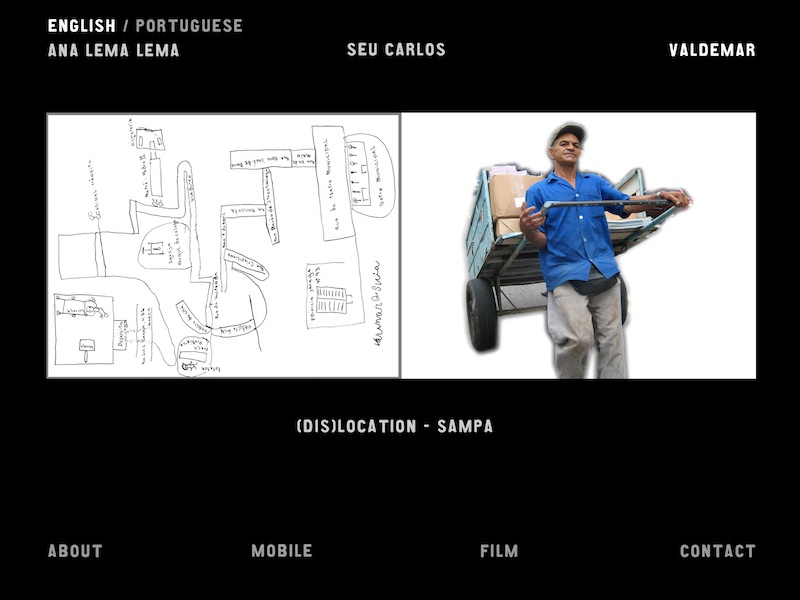 Although the project communicates a certain air of nostalgia and by-gone times by virtue of its Super 8 aesthetic, coupled with various characters repeatedly musing about the outdated mode of production they are engaged in (for example when Seu Carlos declares that his elevator operating "profession is ending as everything gets more modernized"),  Shamash's project captures the contemporary reality of those shut out of the neoliberal turn of Brazil and the world's economy. The neoliberal market today is one that is focused on stocks, bonds and finance and thus has a very different relation to mobility and space. Those engaged in this current, late-capitalist mode of production can work from anywhere in a world that is changing its relation to space, place and mobility as a result of the online space of the computer and the immateriality of the contemporary mode of production. Instead, Ana Cecilia's, Valdemar's, and Seu Carlos' relation to space and place remains material with a strong awareness of the neoliberal systembs impact on their lives. Seu Carlos notes that the price of recycled goods goes up and down depending on the dollar and thus his livelihood is tied to the global financial market.

Commenting on global shifts in our modes of production and changing lifestyles, Zygmunt Bauman asserts that the postmodern condition can be best summarized in the combined metaphor of the stroller, the vagabond, the tourist and the player.[5] In this four-headed beast of a metaphor, Bauman privileges mobility as the key to our contemporary condition. However, for the subjects of Shamash's piece, mobility is not part of a romantic notion of postmodern life. Here, it is not a choice but a necessity to keep moving. Ana Cecilia must leave her native Ecuador to make a living for her family back home. Seu Carlos must leave his home hours before his workday starts to make the long commute into town via subway and bus, and for over thirty years the sixty-six year old Valdemar continues to pull his recycling cart through the streets of Sao Paolo to raise his children. They are characters perpetually on the move, traversing the geography of the city in their own rhythm.

Shamash describes her working methodology as one that is process-based and that relies on tactics of observing, experiencing and interacting in any given locale. This approach also seeps into the audiences experience of (dis)location - Sampa. Through its interactive features, the web and smart phone/podcast modality of the project allows the viewer to share the experience of space with the three protagonists, while acknowledging that each userbs personal trajectory through various points of the three different narratives varies as much as those of the three subjects. The hand-drawn maps, produced by Ana Cecilia, Valdemar and Seu Carlos, can be navigated via the click of a mouse on the website or by the physical interaction in real time via the smart phone app. 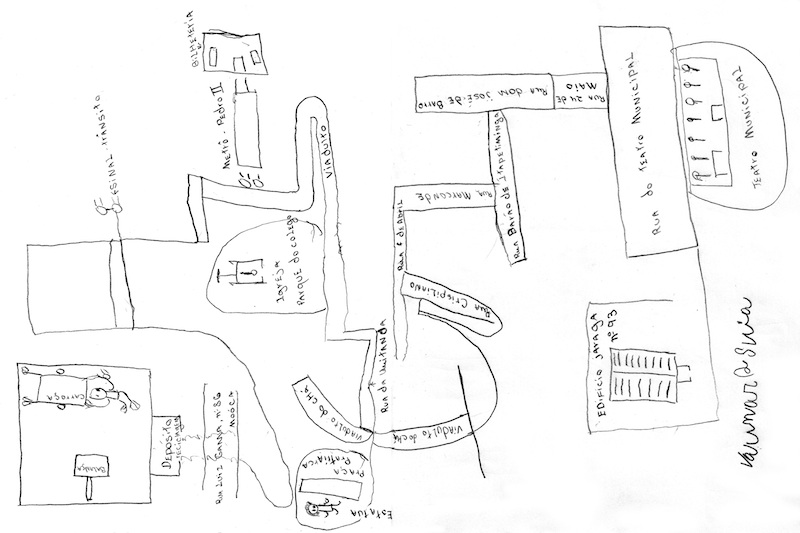 Valdemarbs hand-drawn map of his route to work . 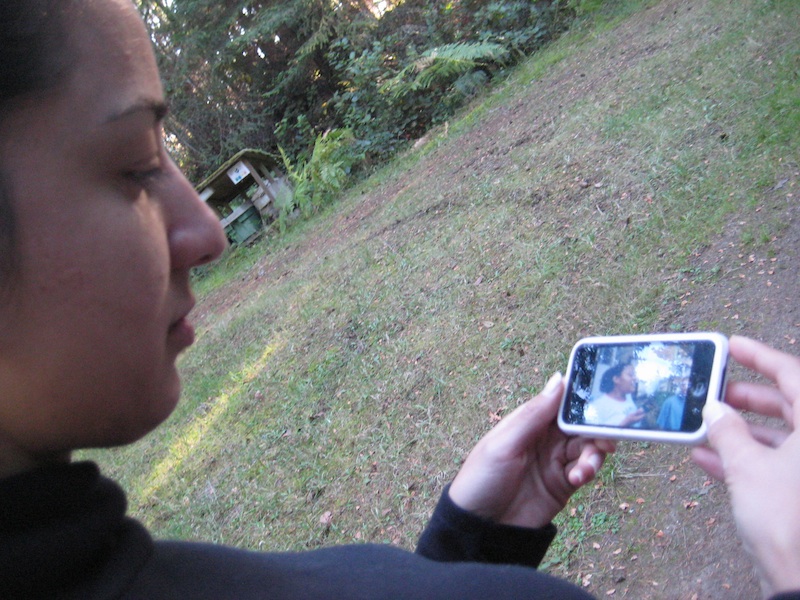 (
dis)location b Sampa mobile app in use .

Reminiscent of fellow Canadian Janet Cardiff's various audio and video tours,[6] Shamash's mobile app evokes similar ideas of memory and the temporal realities of life embedded in complex geographies. However, Shamash's work is of a more direct political nature, drawing out the psycho-geography of each character related to their socio-political position and their experience of the streets and neighborhoods. Ana Cecilia, for example, marks her map areas where she is particularly vigilant due to her illegal status and occupation, such as outside the military police building, drawn prominently on her hand-produced map.

(dis)location Sampa is a fascinating record of how the various personal trajectories of each participating subject interact to transform the centre of Brazil's most populous city. Shamash's work allows us to see how places are not only networks formed from ongoing stories, but also moments within power geometries linked to very specific forms of mobility.