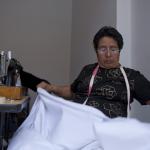 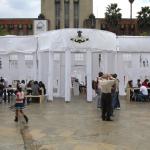 The Collective White House on the Move from Blake Turner on Vimeo.

The Collective White House nº1 is to be constructed from the used bedsheets of an inexpensive motel. Donation of the bedsheets is an important element of the project. The bedsheets are a perfect metaphor for the transient condition of individuals, addressing issues of identity and immigration in the context of an economic system of exchange and labor. The project calls on the participation of the local populace and craft-makers, so the whole of the community reflects on the construction process and ultimately the final structure. This process opens the possibility for abundant nuances and personal expression in the building of the structure. The building is also a commentary on the homogenizing effect of modern labor practices and the ability for communities to generate value locally.

All of the Medellin projects are gathered centrally in a public artwork taking the shape of a 1/5 scale replica of the White House. This charged symbol of global power is reduced in scale, softened by its bed sheet walls and animated by the intimacy of its contents which consider a new relationship to power.

TheB Casa BlandaB contains the resulting work of the agencies including musical recordings, embroidery, maps, videos, cell phone activated LCD displays, costume design, and street performance. The image of theB Casa BlandaB is transformed into an intimate, floating, ephemeral space, for making connections, where the sensual and fragile is privileged over the rational.B Our goal is to identify an affective city, one in which daily lives are revealed in relation to larger social structures. This is a first step in a transformational process that can lead toward a resilient future. .

Utilizing the nomenclature of the institutional process, a series of departments or ministries are housed inside the Collective White House. These departments use our understanding of the bureaucratic process to initiate a dialogue between the people and the institution.

The Floating Lab Collective is a group of artists working collaboratively on social research throughB public and media art projects in Washington DC, as well as nationally and internationally.B They experiment with the aesthetics of direct action in crafting responses to specific places, communities, issues and circumstances.B FLC artists move across visual art, performance, new media, and publications to engage and integrate such social topics as housing, the environment, migration, labor and urban mobility. One of FLCbs most important tools is a converted taco truckb a Floating Museumb that circulates projects among different neighborhoods, communities and regions.