Mobility is central to the contemporary arts. Biennials, art fairs, residencies, conferences, workshops and exchange programmes have come to define the art world, how it does its bbusinessb, and how artists develop their practice through international exposure. Perhaps for this reason, mobility has also been an ongoing concern of contemporary artists. Bouchra Khalilibs Mapping Journey project, which collects the narratives of illegal immigrants and their clandestine journeys to a better life, and Meriç Algün Ringborgbs documentation of the bureaucratic process she endured in becoming a European citizen are just two recent examples of how artists have tackled the issue of mobility.

Since 2007, Delfina Foundation has facilitated artistic exchange through residencies, partnerships and public programming. One of our core objectives is to promote mobility to encourage critical and engaging practices in the arts and create opportunities for public interaction, dissemination, and enjoyment.B In 2011, Delfina Foundation formed a partnership with Tate to offer a year-long residency to an artist to produce a participatory project. Ahmet Öğüt was selected because of his artistic practice, which incorporates interventions inspired by social and political realities of everyday life and recent history. Since collaboration and public engagement are key elements in his creative approach, both Tate and Delfina Foundation were keen to work with him. The only requirement for Öğüt was that there would be sustained dialogue with a group of participants over the course of year and some type of public outcome. Both would be decided by the artist, in collaboration with Tate, after a period of research.

The Silent University, an autonomous knowledge exchange platform by and for refugees, asylum seekers and migrants, was born from this research, discussions among the partners, and meetings with community groups and NGOs. It was also humbling conversations with the Londonbs immigrant groups that largely helped to define the project. Unlicensed taxis driven by Iraqi refugees who had been university professors back home highlighted the economic loss of such refugees and asylum seekers in places of bsafe havenb where they are unable to practice their professions for a host of reasons related to their new status.

Recent debates about immigration and asylum in Europe have been dominated by a concern about the high number of applications and their unequal distribution among countries. This has led to increased xenophobia, changes in immigration policies and the rise of right-wing extremism over the last years. Within this context, EU member states have adopted measures to lower their countriesb relative attractiveness for immigrants and asylum seekers.

While there is much talk in the media about measures taken to restrict the inflow of migrants and refugees in Europe through visa restrictions, there is very little attention paid to other prohibitive measures individually adopted by member states to deter asylum seekers from claiming asylum. These national measures typically affect the rights and benefits given to asylum seekers, namely the right to work, housing benefits, welfare provisions (cash payments vs. a system of vouchers) and educational opportunities amongst others. On the other hand, a significant proportion of immigrants coming to Europe have university degrees and are not able to work in their field of expertise. These limitations, which are relatively under the radar, are precisely the kind of issues that the Silent University aimed to address.

Specifically, the Silent University's goals are to:

Generally speaking, the Silent Universitybs most immediate target group includes those who are not able to exercise their profession, with a view to addressing their lack of educational and professional opportunities. The Silent University directly supports this target group by offering an alternative education platform.B But beyond this target group, the Silent University aims to raise awareness within the general population on the specific limitations and challenges that these individuals face in host countries, which are not discussed in mainstream media. By directly empowering migrants, it projects an image of educated and entrepreneurial individuals, which is very different from the mainstream perception of them as unqualified or uneducated. 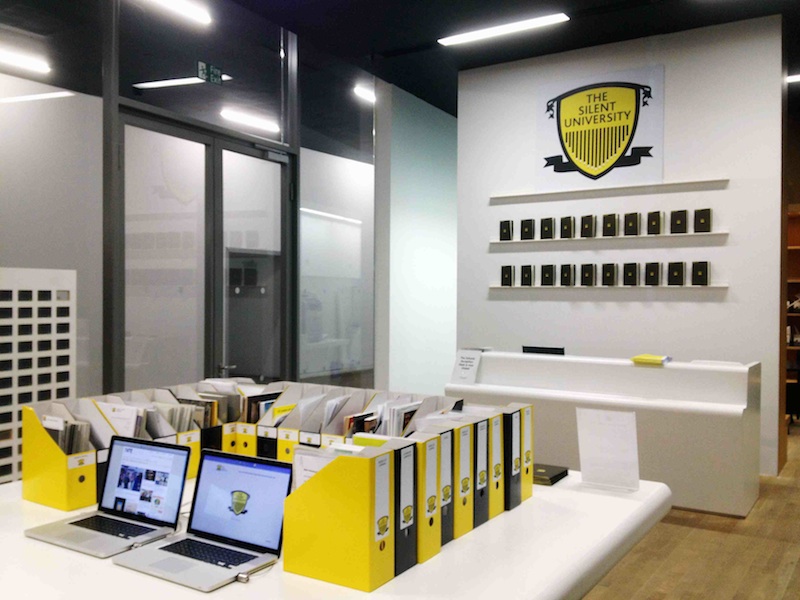 The Silent University was inaugurated at Tate Modern in November 2012 with a series of events including a symposium, a screening program, a Resource Room and a reader. The Silent Universitybs Resource Room, which is growing with each of its iterations, was subsequently housed at Delfina Foundation and The Showroom in London. It contains contributions in the form of essays, books and films from international artists, practitioners, collectives and institutions that resonate with themes of the project. These themes include alternative currencies, silence, modes of learning and migration.

By collaborating with the Migrants Resource Centre in London and other NGOs working with migrants and asylum seekers, a group of lecturers, consultants and research fellows were identified, who have now taken on a leading role in the Silent University. Each of these groups have contributed to the project in different ways, including course development, specific research on key themes as well as personal reflections on what it means to be a refugee and asylum seeker. Courses can be freely accessed through the Silent University website, which serves as an exchange platform between individuals wanting to teach and receive courses.

The Silent University has received significant media coverage in the UK and the number of participants is continuing to grow but its aspiration is to spread beyond the UK to other European countries and internationally. Currently, the Silent University is based at Tensta Konsthall in Sweden, one of the countries of Europe with the highest number of asylum seekers. Arguably, as a result of this, Sweden has witnessed a rise of xenophobia over the past years, as manifested in the election to parliament of 20 members of a far-right party. Tensta Konsthall is located just outside Stockholm in a large late-modernist housing scheme that accommodates approximately 20,000 inhabitants, out of which nearly 90% have an immigrant background. Working with these neighbouring communities is at the core of Tensta Konsthall's mission, and therefore, Tensta is the perfect host for the Silent University. The first events will take place at Tensta Konsthall and ABF-Huset from 26 to 31 October 2013 and will continue until May 2014.

The Silent University is an inspiring project that manifests the role that art can play in conceiving and reconfiguring the political, social and economic landscape of our time. It is unique in the sense that it adopts multiple artistic strategies ranging from ephemeral, poetic interventions (such as the silent performances that several asylum seekers enacted at Tate) to direct action/intervention through the creation of a real and tangible educational platform through the projectbs website. The Silent University bears testament to how the imagination can affect social change, not only as a trigger for public debate on specific issues but also by immediately empowering individuals. As an example, one of the most inspiring outcomes of the Silent University in London was that Yegeta Zega, one of the projectbs research fellows, was granted a work permit in the UK (after waiting for over eight years).B His active role in the Silent University convinced the authorities of the valid contributions that he could make to UK society at large.

Moreover, another unique aspect of the Silent University is that far from being a one-off, temporary, guerrilla-style tactical intervention (which is the larger tendency in contemporary art), it aspires to be a sustainable project that will continue growing internationally, fuelled by individual connections and partnerships with NGOs outside of the cultural sector. It really is what New Yorkbs Creative Time curator Nato Thompson would define as a bsustained place-based workb in which the artistbs creative work is infrastructural and long-term.[1] After Tensta Konstall, Le 116 in Paris and Maxim Gorki Theater Berlin will be the Silent Universitybs next bcampusesb from October 2013.

[1] Nato Thompson, bSocially Engaged Contemporary Artb, as published in A Working Guide to the Landscape of Arts for Change, which can be downloaded at www.animatingdemocracy.org