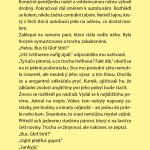 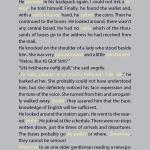 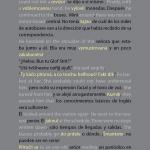 The project is interested in a confusion of a stranger in an unknown world. It is expressed both on the level of a story and a language. The conceptual structure reflects the structure of getting known new languages and the (dis)ability to communicate properly and emotionally, as all the people can do in their mother-languages. The perspective of translation reflects the change of identity, change of subjectivity of narrator when he narrates something in the languages which he doesn't know properly.

The narrated story is two-times repeated, each time in a new language. The story in a mother-language, here Czech, contains familiar, idiomatic and vernacular expressions, words creating feeling of being "home" in the language. In the following translations, these ones are not translated; they are included into English version in the original sound. The last translation into Spanish reflects basic-knowledge of other foreign language. The more complicated words or difficult grammatical issues are not translated. While the story in the English is incomplete but comprehensible, the Spanish mutation is due to bad grammar and plenty of unknown words almost without sense.

The story itself talks about a foreigner wanted to transfer from a train to a bus in a foreign city. He doesn't know the language properly and gets lost both in language as in the town. .

Markéta Magidová (1984) is a Czech visual artist working with language, narration and imagination, mostly in media of installation, performance and text. In her art, Magidová reflects the human interaction on the level on language or story. Texts, in her work, lose their lexical status and begin to behave like image, architecture or events. Beside her exhibition practise, she also published two books (Shapewalkers, 2009, and Home Vocabulary, 2011) www.marketamagidova.com