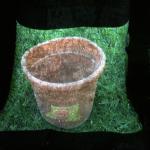 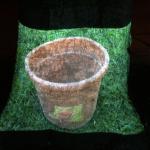 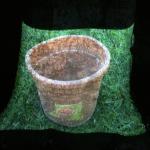 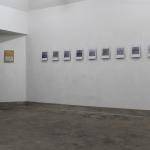 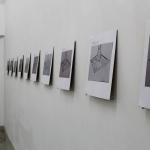 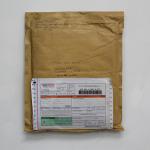 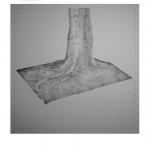 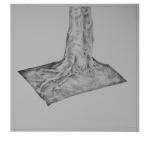 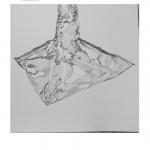 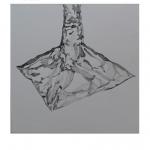 The Ficus Microcarpa tree, which originates from India, was transported to Israel by the British colonists. In the beginning of the b70s, it was transported to the then newly founded Republic of Cyprus by the arbitrary choice of the Municipalitybs agriculturist in charge at that time and was planted in Nicosia, the native city of the two artists, mainly around the Venetian Walls of the old city.

Nowadays Ficus Microcarpa planting is avoided by the Municipality. Its fruits fall on the municipalbs pavements and the high attraction of sparrows causes dirtiness, while its roots have destroyed the pavements.

How does the foreign become local? How does it lose its exotic identity and how does it acquire a local colour? To which extent is the notion of transportation linked to that of emigration?

During the creation of the works the two artists are apart; the one in the urban habitat of the tree, Nicosia, Cyprus and the other in Thessaloniki, Greece. A continuous exchange of information is initiated through the internet.

In the video Ficus Microcarpa: The void of the distance 01, the nearly static image is the result of the incorporation of an empty flowerpot and the trunk of a Ficus Microcarpa. An exchange of video recordings is developed between the two artists, starting with the scene of a flowerpot outside Kattou's temporary residence. The video is then sent through the internet to Toumpouris, it is projected on the trunk of the tree and the projection is recorded through video. The new video is sent back to Kattou, which she then projects it on the same flowerpot, records the result through video and sends it back to Toumpouris who follows the same procedure. The artificial penetrates into the natural and vice versa. The container is opposed to the content.

In Ficus Microcarpa: The void of the distance 00 the artists choose a photo, which focuses on the roots of the tree, from the archive created during their research. Toumpouris produces the first drawing representing the specific photo. He takes a photo of the drawing and sends it to Kattou via email. Kattou reproduces it, she takes a photo of the drawing she reproduces and sends it back to Toumpouris, who follows the same procedure. The result is ten drawings, produced in one week. Each drawing is completed in 3 - 4 hours, referring to the time a tree requires to be integrated into a new environment (30 - 40 years). The visual elements of the first drawing are unexpectedly modified and deformed.

The installation consists of the ten printed emails the two artists exchanged and the envelope which contains the five drawings that Toumpouris sent to Kattou.

To which extent does the methodology followed refer to the procedure of integration of Ficus Microcarpa in the environment of Nicosia? In the process of the inflow of the exotic into the local, the foreign into the native, the unknown into the familiar.
.

Lito Kattou was born in Nicosia, Cyprus in 1990.B She graduated from Athens School of Fine Arts in 2013.B She participated in group shows and workshops in Cyprus, Greece, Poland and Germany.B She lives and works between Athens, Greece and Nicosia, Cyprus.B e: kattou.lito@hotmail.com http://litokattou.com/

Leontios Toumpouris was born in Nicosia, Cyprus in 1982.B He graduated from Athens School of Fine Arts in 2009.B He participated in group shows and workshops in Cyprus, Greece, The Netherlands, Belgium, Serbia, Italy and Austria.B He lives and works in Nicosia, Cyprus.B e: tleontios@hotmail.com