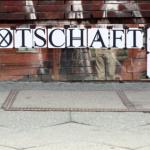 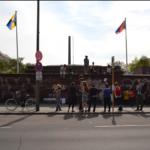 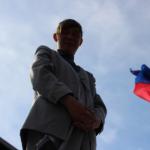 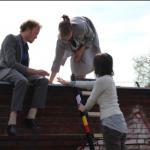 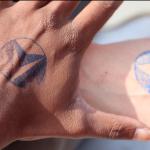 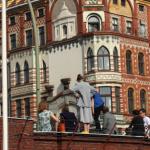 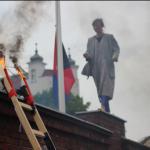 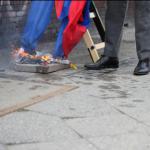 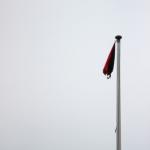 Wall Embassy was an embassy without state on top of a wall in Wedding, Berlin.

During opening hours for one week, people could apply for entry by climbing a ladder. As the artists/ambassadors running Wall Embassy, we provided curious passers-by with information and welcomed them to join us on the wall.

This temporary stateless zone was an invitation to discuss concerns regarding borders, statelessness, and the (im)mobility of objects and people. In order to sit on the wall, each applicant was required to undergo an entry test, during which he/she was asked three similar questions. The questions required that applicants think of one object, whilst simultaneously speaking the word for a different object, for example, bthink of Europe, and at the same time, say Egyptb.

Within the parameters of this simple word game, it becomes clear that language structures borders. Our objective was to open a borderless zone where the nation state could be considered from a distance, calling attention to the arbitrary nature of territorial claims and the criteria which governs the individualbs movement through them. This naturally induced conversation about the individualbs status within geopolitical systems.

Whilst one ambassador would examine the applicant, the other would carefully evaluate his/her performance. The results were communicated with a blue stamp (ballowedb) or red stamp (bnot allowedb). Though the criteria for evaluation appeared pre-prepared to the applicant, we made our decisions arbitrarily, or based on objective and intuitive measurements. Our decisions bore little relation to the accuracy of applicantbs response to the test. Furthermore, despite the absoluteness of the categories 'allowed' and 'not allowed', we gave no indication of what the applicants were ballowedb or bnot allowedb to do. The rules were never spoken, just implied. Few realised this, indicating how laws are maintained as much by violence as by reflex submission and consensus.

This confusion replicated the experience of trying to cross politicised spaces. As as ambassadors, we were invested with the power to judge people simply through a bureaucratic process and a population willing to submit to the rules.

Responses to the project were varied. Our applicants included members of the migrant communities of Wedding, artists visiting Uferstudios Berlin b the organisation that hosted us b and native Germans (including a daily visit from the police). We encountered both ideas which would be considered xenophobic and idealistic visions of global reconciliation. From the vantage-point of this temporary stateless space, it was for the individual to determine both their location within the state, and the ontology of the state itself.

On 10thB of May 2013, we conducted a bombing of the embassy. We tied small bombs at the end of the ladder, and exploded them in front of a live audience of passers-by and members of theB Internationales Forum, Theatertreffen (Berliner Festspiele), who facilitated our project. Signage and the protocol document were burned, as were the embassy flags.

With the friendly support of Uferstudios Berlin and the 'International Forum', Theatertreffen, the Berliner Festspiele.

Sonja Hornung & Richard PettiferB are Berlin-based Australian artists.B Working across performance, installation, and activism, they interfere with public spaces in order to open dialogue and confront people with problematic social and political situations. Previously, they have collaborated on Brunswick Beach (2011), an urban beach forty-three metres above sea level that served as a platform for conversation about climate change.